Appendix n ° 2 to my hearing before the commission chaired by MP Julien Aubert
http://videos.assemblee-nationale.fr/video.7769994_5cf8fe6480bbb.impact-economique-industriel-et-environnemental-des-energies-renouvelables--m-ludovic-grangeon-et-6-juin-2019

We know, of course, that the psychosomatic character intervenes in all pathologies, which can only exacerbate the cumulative effect linked to the permanent exposure of people living near wind turbines to their light flashes, to the obsessive rotation of the rotor, to their solidian vibrations, as well as to the qualitative impairment of the living environment and real estate heritage.

On the other hand, several studies have objectified the health consequences of the exposure of animals to wind turbines. In particular geese [5] and pigs [6] depending on the distance from their farming to the machines. The proximity of wind turbines has been indicted in connection with health scandals for horses in Portugal, for mink, in Denmark and for several cattle farms, especially in France.

However, although the National Academy of Medicine noted, in its last report, an attack on the quality of sleep within a radius of 1500 meters from wind turbines, which it recognizes, as a consequence, as altering health, its opinion, like that of ANSES, only objects to the insufficient quality of the level of evidence of the causal link between wind turbines and symptoms described by residents.
They evoke the responsibility for a “nocebo effect”, a harmful inverse to the “placebo effect”, which would result from the fear of local residents to be affected by wind turbines, from their opposition in principle to renewable energies, as well as to alarming studies on the subject
disseminated on the web by opponents of wind turbines.

This obvious denial of the reality of the problem, which is constant in every health case, has notably sparked an accusatory report by epidemiologist Carl V. Phillips *, after he had fought against the same biases in his fight against tobacco.
In his report “Properly Interpreting the Epidemiologic Evidence About the Health Effects of Industrial Wind Turbines on Nearby Residents” He denounces: "There is overwhelming evidence that wind turbines cause serious health problems among local residents, in a significant proportion and whose origin is generally linked to stress. Evidence of this is in thousands of reports. " He considers that “Attempts to deny this evidence cannot be considered as an honest scientific disagreement but represent either crass incompetence or intentional bias. " Ironically, in an attempt to refute the work of Mrs. Alves Pereira that she had sent to ANSES [PJ], this organization evokes, in its last report [7], a study by the team itself that coordinates Mrs. Alves Pereira and whose conclusions, on the contrary, explicitly reinforce his previous work. Indeed, this study precisely highlights the role of the combination of low frequencies and vibrations, specific to the "Vibro Acoustic Disease" on which Mrs. Alves Pereira has been working for 30 years and on which she was led to incriminate wind turbines.
On the other hand, the scientific literature on the subject agrees to consider that at equal power, wind noise is among the most disturbing. This characteristic, recognized in particular in the AFSSET 2008 report, is illustrated by the graph below extracted from E.Pedersen
“Perception andannoyance due to wind turbine noise” . 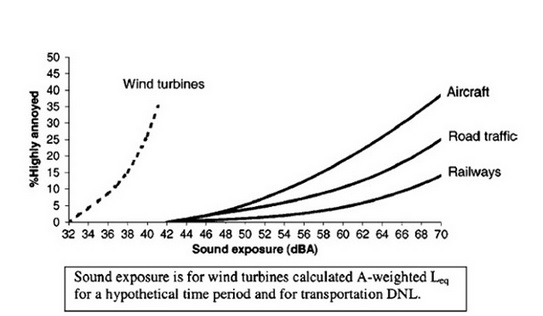 And this notably because of the importance of the low frequency components of the wind noise, highlighted by many authors like J. Punch which shows in particular the correlation between the progressive increase in the power of the machines and the lowering of the mean frequency of their sound spectrum.
But also because of its impulsive nature, its great variability and the aggravating circumstance that it emerges most of the time in a silent environment.
This can only raise questions about the conditions under which the wind turbines were exempt from the public health code, while the text put in consultation with the state services provided for its strict compliance less than a month before the signing of the decree of August 26, 2011 which dispenses them.
The ICPE classification which accompanies this decree cannot be the reason since wind turbines are explicitly excluded from the ICPE acoustic regime [8], contrary to the answer that was given to Senator AC Loisier following her question to Government on this subject [9]. The amendment defended in particular by Mr. Bal for the renewable energy union during the meeting of August 8 of the Superior Council of Energy (PJ) and which claims this derogation by raising the ambient noise threshold by 5 dBA wind turbines can be held liable, raises questions in terms of public health. This threshold is indeed 30 dBA in the public health code, and therefore, now 35 dBA for wind turbines. On the other hand, the passage of the blades in front of the mast results in a significant amplitude modulation of the wind noise. Following the voluminous report of a group of experts presented by MP Chris Heaton Harris, [10] the British government recognized its particularly disturbing nature and undertook work aimed at reforming the regulations. Conversely, the French professional sector encourages the idea of ​​the emergence of wind noise to be replaced by that of a "statistical emergence indicator" which aims to eliminate instantaneous sound peaks. This is how work on the draft measurement standard Pr NF 31-114, which nevertheless appears in the decree framing wind noise (August 26, 2011) was suspended for lack of consensus between the various experts responsible for its redaction, and this should be replaced by a Measurement Guide drawn up by CEREMA, a public administrative body, in particular engaged in the promotion of renewable energies. [11]
Finally, the control of spectral emergences at low frequencies (compulsory in the public health code) has disappeared from the regulatory obligations for measuring wind noise, despite the particularly sensitive nature of these emergences

Prospective
Basic protection for local residents should now require:
1 That the problem be quantified, as repeatedly demanded by the Academy of Medicine and the ANSES, by implementing an epidemiological study.
Because noise, with more than 10,000 premature deaths per year, is considered the 2nd environmental health cause. (European Environment Agency, report 10/2014, p 5).
These premature deaths are linked to stress and poor sleep quality.
Those linked to stress caused by wind noise can no longer be concealed by the evocation of a "nocebo" effect for which residents of wind turbines are themselves responsible.

2 That an instantaneous emergence control method be implemented and that the inevitable measurement uncertainties be not systematically paid to the operator's credit, as is currently the case.
Because it is indeed logical to sanction the operator only in the case of certainty that the regulatory values ​​are exceeded, risk management should not allow to endanger the health of residents in the case of uncertainty.
This control method should make it possible to verify that the regulatory values ​​are not effectively exceeded, contrary to current practices which are more akin to a statistical method intended to optimize the acoustic clamping plans, but cause various sound peaks to disappear on average, while they can interrupt sleep.

4 The implementation of a multidisciplinary and independent scientific commission, responsible for improving knowledge relating to the various characteristics of chronic exposure to industrial wind turbines.
And in particular in the fields of psychoacoustics, very low frequencies and infrasound, vibrations, amplitude modulation, the cumulative nature of these criteria and the duration of exposure.

5 Pending the conclusions of this commission, a precautionary distance of 2 km between wind turbines and homes is established, as proposed by the Polish Institute of Public Health [12] after studying 487 publications on the subject [13].
Or 10 times the height of the machines, as in Bavaria.

6 No repowering operation will be authorized without a new impact study.
For the reason that the increase in the electric power of machines is generally accompanied by that of their acoustic power (up to 107 dBA for 3 MW against 104 dBA for most of 2 MW), but also due to a lowering of the mean frequency of their sound spectrum linked to the lower speed of rotation.
This reduction is described as more impacting for residents by numerous studies. [14]